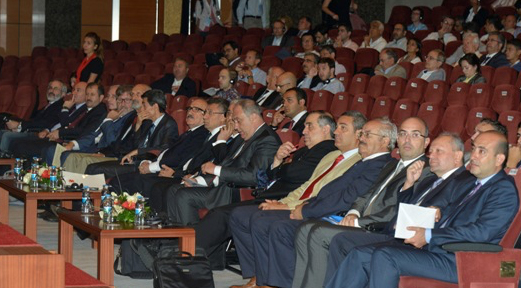 The European Earthquake Engineering and Seismology Conference was held on 24-29 August 2014 in Istanbul Lütfi Kırdar Convention and Exhibition Centre.

The opening speech in the conference was made by Deputy Prime Minister Beşir ATALAY. “This meeting is very important both for Istanbul and Turkey. If the residents in Istanbul are asked to make a ranking for the question: ‘what is the most important problem of Istanbul?’, all of them would say ‘earthquake in the short and long term’. All the rest comes after that”, Deputy Prime Minister ATALAY said in his speech.

IPCU Director Kazım Gökhan Elgin, who was in conference advisory board, chaired the session named “Reinforcement of School against Earthquake”. In said session, 6 presentations were made for the school retrofittings in Iran and UN operations in the region, together with presentations regarding works performed under the ISMEP project. During one of the most crowded and broadly participated sessions of the conference, ISMEP’s school-specific efforts received credits, and it was emphasized that these efforts should be recognized as a model worldwide.

In the conference, of which IPCU was one of the supporters, the ISMEP stand served the visitors throughout the conference, providing information to participants. In the stand, not only the visitors were informed but also ISMEP project guide books and other ISMEP-related materials were shared with the visitors.

Moreover, a book named “Geotechnical, Geological and Earthquake Engineering”, including articles, notices and presentations of invited speakers in the conference, prepared by Springer, a worldwide known publisher, with the support of Istanbul Project Coordination Unit. IPCU Deputy Director Fikret Azılı participated in in the session titled: “Urban Earthquake Hazard: Structural and Non-structural Hazards” as a speaker, and informed the participants about the ISMEP project.