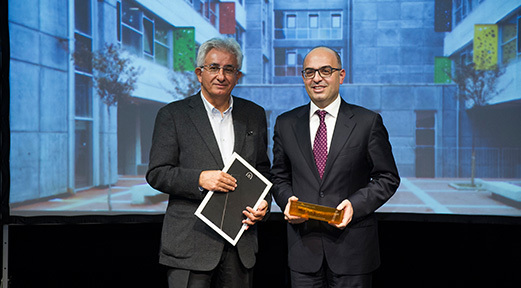 Istanbul Project Coordination Unit (IPCU) was honoured as the winner of Public Category. The award, the winners of which are determined according to public responsibilities of the architect and the employer, has been given for honouring the enterprises that perform qualified architectural works in public and private sectors. In the Arkitera Employer Awards which cover building, building groups, engineering structures, indoor applications and outdoor arrangements, the winners are determined by nomination.

In Arkitera Employer Awards given in two categories: Private and Public Sector, the winners were selected by a selection committee constituted by Cafer Bozkurt, Yüksel Demir, Bilge Kalfa, Doğu Kaptan and Alper Ünlü on October 3. The previous year winner in the public sector category was Istanbul Metropolitan Municipality with its Şişhane Urban Square and Underground Car Park project.

The Istanbul Seismic Risk Mitigation and Emergency Preparedness Project (ISMEP) implemented by IPCU aims retrofit and reconstruction of school and hospital buildings, as well as other public buildings against earthquakes. IPCU has retrofitted and reconstructed nearly 1258 buildings against earthquake so far, of which the 44 schools reconstructed against earthquake under ISMEP, which entitled IPCU to the award, are located in 14 different districts of Istanbul. The schools located in Bakırköy, Bayrampaşa, Beşiktaş, Beykoz, Beyoğlu, Esenyurt, Eyüp, Fatih, Gaziosmanpaşa, Güngören, Kağıthane, Şişli, Üsküdar and Zeytinburnu are constituted by 15 primary schools, 17 secondary schools, 11 high schools, and 1 private education and vocational education centre.

Though architecture of and materials used for the reconstructed schools have a certain standard, each school was specially projected to well adapt its neighbourhood. In addition, the operating and maintenance costs were tried to be minimized. In schools reconstructed, IPCU did not only take into account earthquake resistance but also aesthetic, environmental, and energy efficiency aspects.